A 40+ kilometre long trail that will link Lilydale, Yarra Glen, Healesville and join into the Lilydale to Warburton Rail Trail.

Work is currently underway to build more than 40 kilometres of trail, connecting Lilydale with Yarra Glen and Healesville, then across to the Lilydale to Warburton Rail Trail, creating a valley-wide loop.

The project will help Yarra Ranges become the number one tourist destination in Victoria, and our community will be able to explore and experience their own region in a variety of different ways.

The first stage of the Yarra Valley Trail running from Lilydale to Yarra Glen will be constructed in two parts.

Stage 1a from Lilydale to Yering has relatively few bridges or other complexities. Construction has commenced and should be open to the public in October 2019.

Stage 1b from Yering to Yarra Glen requires more approvals and is more complex to construct. It requires a number of bridges to be reconstructed, including a bridge over the Yarra River. Construction of stage 1b is expected to commence in March 2020 and should be open to the public by the end of 2021. 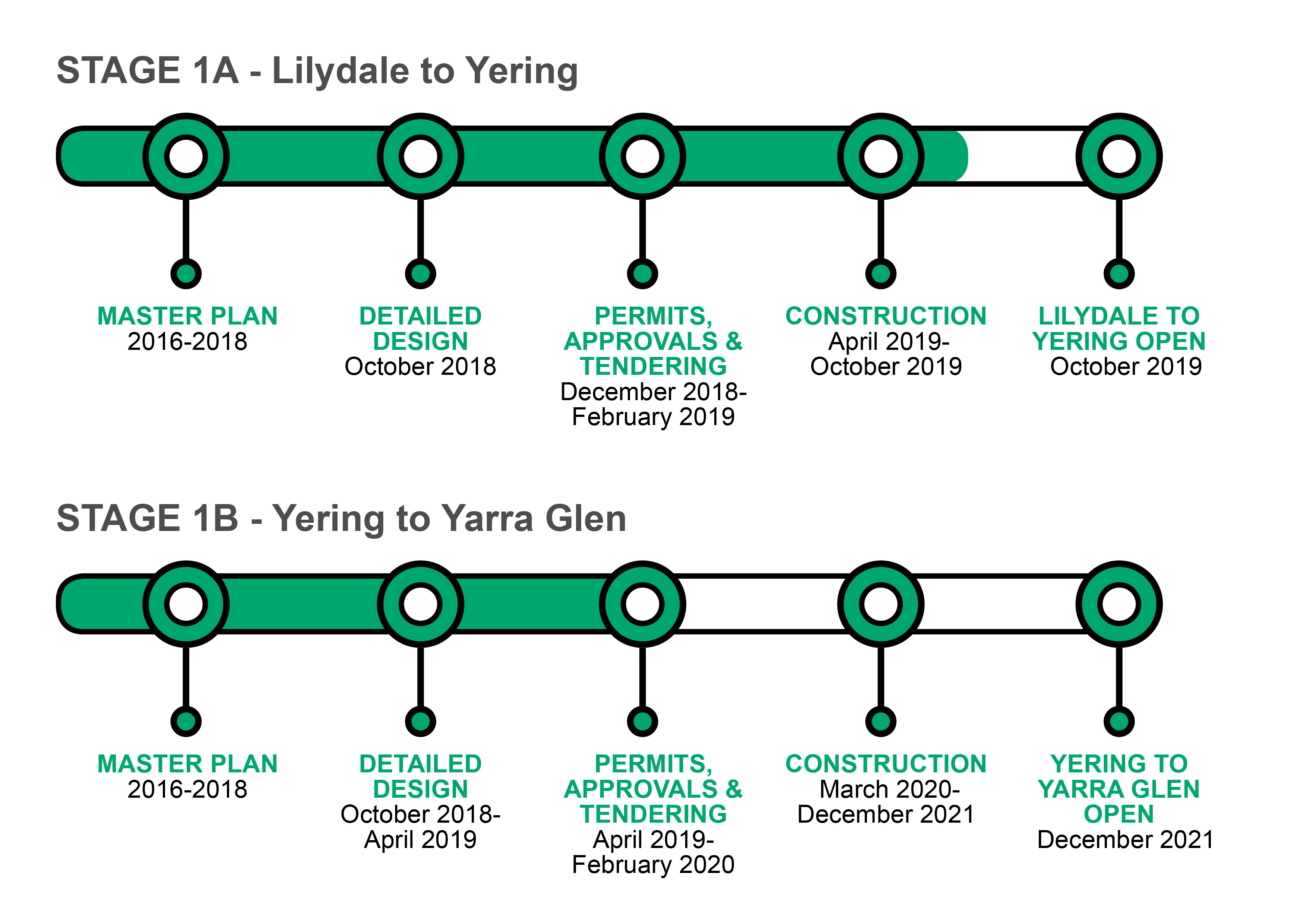 Time frames for stages 2 and 3 of the project are not yet available, and are subject to additional design and project funding. 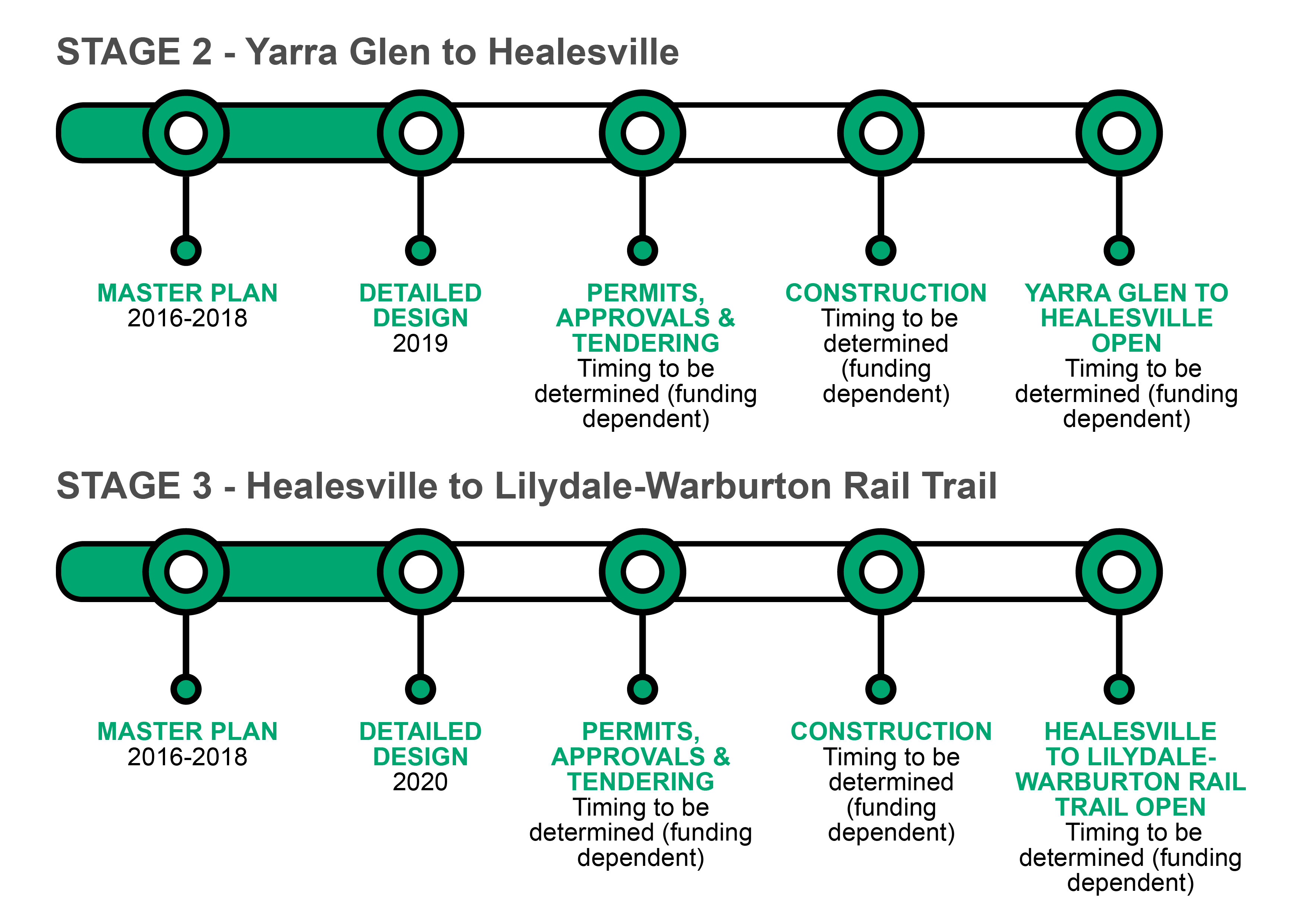 Stage 1 of the Yarra Valley Trail follows the alignment of the railway line between Lilydale and Yarra Glen that operated for almost one hundred years until it closed in 1980.

It will be constructed in two phases and will end at the recently restored Yarra Glen Railway Station, which will soon once again host steam train services run by Yarra Valley Railway tourist railway.

This stage will have equestrian access as well as in future stages where feasible.

Some railway will be recycled for tourist railways.

This stage will feature new bridges to replace the heritage bridges that were destroyed in the 2009 Black Saturday fires as well as a new bridge over the Yarra River.

The newly reinforced and repaired bridges will keep the existing character in line with heritage guidelines.

The project has received substantial State and Federal government funding, including:

Stage 2 will wind around the wineries and rolling hills of the Yarra Valley, providing linkages to some of Melbourne’s best wineries, art, cultural experiences and iconic tourism products.

The cost for stage 2 is still to be determined.

There are a number of options available for linking Healesville back to the Lilydale-Warburton Rail Trail. These include a route following the Yarra River, and/or an alignment along the Coranderrk Aqueduct.

Both options offer opportunities for users to experience natural environments, as well as creating links to other nature-based attractions such as Healesville Sanctuary and the Warramate Hills Reserve.

The cost for stage 3 is still to be determined.

The Yarra Valley Trail will support a range of environmental benefits, including:

Environmentally sensitive design will be incorporated to reduce and mitigate environmental impacts.

A detailed Flora and Fauna Assessment has been undertaken for stage 1.

Stage 1a has a Construction Environmental Management Plan with has incorporated guidelines from the Flora and Fauna Assessment, and native vegetation zone will be fenced off and protection zones around large trees.

The new trail will complement the Lilydale to Warburton Rail Trail, making the Yarra Valley a top cycling destination.

It will add value to and connect major tourist destinations (such as food and wine in the Yarra Valley and Healesville Sanctuary Zoo) and local businesses.

The trail will provide a safe off-road, shared-use path for riding, walking and running, minimising the use of the high-speed roads for active transport and recreation.

The benefits health and recreation benefits of the Yarra Valley trail are aligned with Council’s health and wellbeing strategy.

Have a look at what’s been happening with the Yarra Valley Trail project.

Who will build the Yarra Valley Trail?

The Yarra Valley Trail Project will be delivered by local company Kent Environmental and Vegetation Management.

How will the trails be managed?

It is proposed to establish an Incorporated Association to manage the trails. This means all profits are put back into the association’s activities.

The association will manage the operation, maintenance, volunteers, events and marketing of the trails network, including both the Warburton Mountain Bike Destination and the Yarra Valley Trail.

Will the trail cross roads?

The trail alignment will require some road crossings. The number of road crossings will be minimised, and will be designed with specialist traffic engineering input to ensure that they are safe.

Will the rail trail prevent the rail corridor from being used for trains in the future?

Planning for the trail has involved working with Yarra Valley Railway, including agreement regarding the sharing of facilities at the Yarra Glen Station and keeping the option open for a tourist railway between Yarra Glen and Lilydale in the future.

The existing train tracks between Lilydale and Yarra Glen are in poor condition and will be removed to accommodate the trail. Extensive bridge and rail construction works will be required to accommodate any future rail provision along this corridor.

How is heritage being addressed?

The project planning has been undertaken with input from the traditional owners.

The rail corridor includes some existing wooden bridges, although a number have been lost to fire and those remaining are not in a safe and usable condition.

The design proposed for these bridges includes retaining as much of the existing structure of these bridges as possible, and reinforcing them to make them safe for trail use.

Will the trail cater for horse riding?

Equestrian use will not be able to be catered for along the full trail alignment as the stage 1 rail corridor between Lilydale and Yarra Glen includes sections of relatively narrow elevated embankments and long elevated structures.

Equestrian access will be possible from Lilydale to Yering and in future stages where it is feasible.

What material will the trail be constructed from?

The Yarra Valley Trail will be made of stabilized Castella toppings, which have a 3% mix of cement to act an adhesive.

This surface type has been selected based upon a range of factors including continuing the experience provided by the very popular Lilydale to Warburton Rail Trail, contribution to a rural/natural character, construction cost, and best catering to a wide range of users.

Like the Lilydale to Warburton Rail Trail, the trail surface will be maintained to a level that allows use by most kinds of bicycles and riders at most skill levels. Because stage one of the trail follows a former railway alignment, there are no steep hills, sharp corners or other hazards.

What services will be available?

Services will include toilets at Yarra Glen, as well as shelter, seating, interpretation signage, parking and picnic table at various points along the trail.

How will adjacent landowners be impacted?

Stage 1 is bordered by a number of agricultural and other uses, and there is some use of the rail corridor associated with those uses (including crossing points and grazing).

These uses are believed to be largely compatible with the trail given appropriate fencing and gates. Similar situations exist along the Lilydale to Warburton Rail Trail and have been successfully managed.

Residents that have the trail directly adjacent to their property will have the opportunity to assist Council in identifying solutions to mitigate concerns.

How will the trails benefit my business?

The Warburton Mountain Bike Destination and Yarra Valley Trail are expected to bring around 432,000 visitors annually to the Yarra Ranges. This consists of 384,000 day visitors and 48,000 overnight visitors.

This equates to approximately $49 million in economic spend within the region annually, and presents a significant opportunity for businesses to increase their customer base and profits.

How will the trails support increased public awareness of environmental issues?

The trails will allow greater community access to engage with the natural environment, and therefore learn about it and value it.

Along the trails will be education and interpretation signage and opportunities that support environmental and cultural awareness and advocacy.

How will the Yarra Valley Trail benefit the community?

The Yarra Valley Trail will:

Want to know more about the project, or want to leave some feedback? We’d love to hear from you!